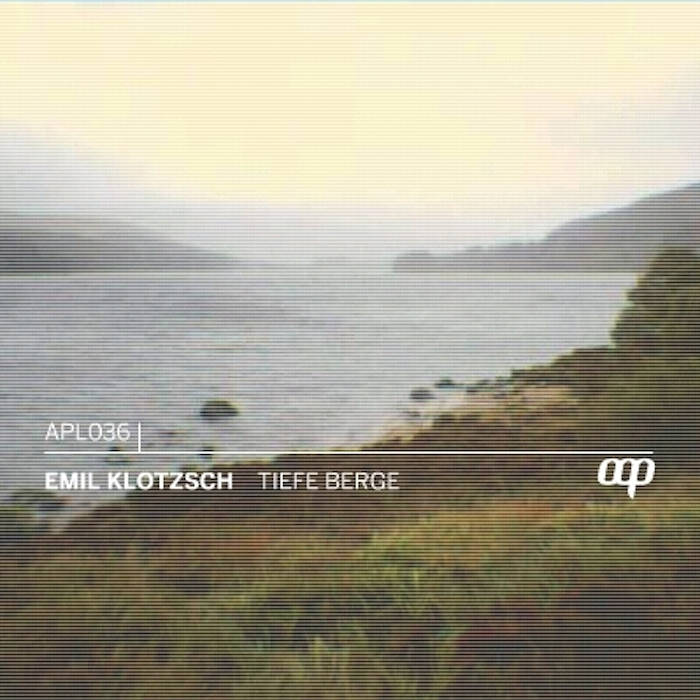 "Tiefe Berge" was my second release, it came out on the "Autoplate" netlabel in march 2006.
This version is a different one than the one that was released at autoplate. its a different mastering. (not a new mastering, just a different one. a bit more dynamic...)

Here is the old press-text:

"The Highlands consist of an old dissected plateau, or block, of ancient crystalline rocks with incised valleys and lochs carved by the action of mountain streams and by ice, the resulting topography being a wide area of irregularly distributed mountains whose summits have nearly the same height above sea-level, but whose bases depend upon the amount of denudation to which the plateau has been subjected in various places." (from en.wikipedia.org)

The intention behind ÃÂTiefe BergeÃÂ was for Emil Klotzsch to create a sonic exploration of this cinematic area of the world. Therefore, he traveled to the Highlands by himself to feel the power and myth of the rural northern part of Scotland. The result is a an audio exploration of the vast flora and fauna that the majestic Scottish highlands offer, recreated by many field recordings taken, who form the plateau of these takes. Streaming water, the whistling of the cold and foggy wind, its cruising birds around who are barely whistling, the distant grumbling of clashing rain clouds and on top of all these particular moments of majestic silence - all of these original recordings redraw accurate layers of the true Scottish Highlands experience viewed from the eyes of an artist who is looking for solitude.

So, who is the artist behind this body of work? Emil Klotzsch is a Sound Designer /-Editor working in Film Post-Production. ÃÂSound design in movies is a rather abstract form of music. One composes ÃÂstoriesÃÂ on a rather ÃÂabstractÃÂ level. Most of the time, you work with organic sounds or create new sounds out of them. ÃÂTiefe BergeÃÂ is quite influenced by that approach of composing music. I always design a sound out from the beginning. Starting at zero and then see how far it goes. As for ÃÂTiefe BergeÃÂ, the origins of everything are organic field recordings taken during my exploratory voyage through the Scottish Highlands.ÃÂ

To a skilled listener, it is clear that these long earthy pieces are inevitably influenced from classic music composers in terms of conduction and arrangement. In private, Emil listens to a lot of classical music, such as works by Schubert, Schuhmann, Mahler or Brahms. Klotzsch focuses on the moment of dignity, the pursuit of a scenic evolution of the soundscapes. Therefore, the changes mostly begin within the lower frequency ranges, with the humid silent moments that begin to grow.

Assembling this potpourri of recordings into an album full of suspense and depth has demanded a lot of patience and experience. Emil contemplates "One does not have much control while working with field recordings, as good takes are mostly a product of luck and intuition most of the time. It was not always easy to do recordings at all as the weather over there means a lot of rain and cold wind."

My love of the beautiful countryside is a major influence to me. I love England, but I love Scotland even more. As a child my parents always went on holiday to England, but sometimes we would also go to Scotland. This country has made a great impression on me, so periods of wanderlust arise persistently.

Then, the year before last I went to Scotland, on my own. Most of the time it was raining and I stumbled here and there while trying to jump over runlets. However my driving force was that I love both the reclusive surroundings, mountains and most of all, I love the lakes. There is not much in my life that made me similarly overwhelmed as to spotting the lakes. Therefore, ÃÂTiefe BergeÃÂ is sort of a homage to these lakes, hence the title. These lakes are very inky and people tell they are very deep. Their appearance is simply amazing. I did a lot of hiking and strolling and also went swimming in one of these lakes. Naturally it was very cold while swimming, so this decision was somewhat shortsighted.

I had microphones and a minidisc recorder with me, and I tried to record as much atmosphere and other sounds as possible. When I returned to Germany, I started doing music on the basis of these recordings. It was of great importance to me that every sound to appear on this album was based upon the sounds I recorded in Scotland. Thus, the music is a mirror of the subjective feelings I experienced over there.

I didn't stay within the Highlands at all times. I had started my journey at Loch Lomond, and then proceeded onward to the Highlands. Loch Ossian was the name of one lake that I traveled to, and I stayed in a hostel that you can only reach by train. They call it a ÃÂrustic hotelÃÂ since it has no running water, and the electric power is generated by a windmill. There is no street leading to that hostel, and if you wanted the train to stop you had to talk to the train conductor, otherwise the train would just pass by. There was nothing besides an abandoned house and this very cozy hostel. The next bus stop was about 10 miles away.

I went swimming in this lake as there were no showers available at the hostel. It was ice cold. The lakes are indescribably dark, and swimming in one of them is scary. You never know how deep it is and what is swimming below you. It was awesome, just as the whole scenery and landscape are. Everything is so big so it doesn't really feel as if it is a landscape meant to become populated by human beings. It more feels like if it's meant for giant animals. If you hike across this area on your own, you just feel that much smaller. It is a strange feeling, but definitely a good one.

Experiencing the sound of this area has been a lush and sublime experience for me. No cars, all you could hear was that wind and small waterfalls in the distance. The usual sounds of civilized life were missing entirely. The wind was pure and even when it was storming it was less hectic, cause the urban sounds you're used to from your everyday life were missing.

Nearby was Loch Treig, which is quite a big lake. I went hiking on the nearby mountains and watched the lake from there, trying to feel the depths below me. I now understand why people narrate legends of mysterious animals living in the lakes. On the day of my arrival at Loch Treig, I went out on my own and there were no other people around. I felt far behind while I was walking by the lake. Then I followed a curve and spotted a lonely white house in the distance. There was no road leading to the house. It felt like it didn't belong there, as it really was in the middle of nowhere. Shelves were nailed on the windows and from what I was told it once was the home of a shepherd.

By the way, one car made it into this album. While I did a recording at Loch Lomond a car was passing by at the beginning of the recording. Many times there were memorable moments - either a lonely sheep on a slope, the sound of a certain wind or something completely different. At one point I spotted some beautiful stones and decided to take a closer look at them. As I approached them I discovered they were actually birds, whose feathers had the same colour as the nearby stones. They looked like small eagles but were only as big as doves, and the feathering above their claws was white. They made strange and subtle sounds. Unfortunately I didn't have my recorder with me, and if I would have had started to move around to grab the recorder they would have surely flown away. These birds felt so strange to me, just as if I was dreaming.